Caspase-2 is a mediator of apoptotic signaling in response

The antibody conjugate gemtuzumab ozogamicin (GO; Mylotarg®) provides targeted therapy of acute myeloid leukemia (AML), with recent approvals for patients with CD33-positive disease at diagnosis or relapse, as monotherapy or combined with chemotherapeutics. While its clinical efficacy is well documented, the molecular routes by which GO induces AML cell death warrant further analyses. We have earlier reported that this process is initiated via mitochondria-mediated caspase activation.

Here we provide additional data, focusing on the involvement of caspase-2 in this mechanism. We show that this enzyme plays an important role in triggering apoptotic death of human AML cells after exposure to GO or its active moiety calicheamicin. Accordingly, the caspase-2 inhibitor z-VDVAD-fmk reduced GO-induced caspase-3 activation. 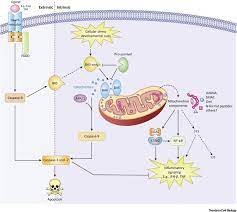 This finding was validated with shRNA and siRNA targeting caspase-2, resulting in reduced caspase-3 activation and cleavage of poly [ADP-ribose] polymerase 1 (PARP-1). We previously demonstrated that GO-induced apoptosis included a conformational change of Bax into a pro-apoptotic state. Present data reveal that GO-treatment also induced Bid cleavage, which was partially reduced by caspase-2 specific inhibition while the effect on GO-induced Bax conformational change remained unaltered.

In mononuclear cells isolated from AML patients that responded to GO treatment in vitro, processing of caspase-2 was evident, whereas in cells from an AML patient refractory to treatment no such processing was seen. When assessing diagnostic samples from 22 AML patients, who all entered complete remission (CR) following anthracycline-based induction therapy, and comparing patients with long versus those with short CR duration no significant differences in baseline caspase-2 or caspase-3 full-length protein expression levels were found. In summary, we demonstrate that GO triggers caspase-2 cleavage in human AML cells and that the subsequent apoptosis of these cells in part relies on caspase-2. These findings may have future clinical implications.

Acute myeloid leukemia (AML) is the predominant leukemia in adults. Despite multimodal chemotherapy, poor outcome is still common with long-term survival only seen in approximately 20% of the patients [1]. Although regular high-dose chemotherapy (CT), typically comprised of an anthracycline (e.g. daunorubicin) and cytarabine (ara-C), frequently induces complete remission (CR), most of these patients relapse with a chemoresistant phenotype [2].

Alternative targeted therapy approaches involve the use of monoclonal antibodies, either engineered or conjugated to small molecules or radionuclides [3]. Gemtuzumab ozogamicin (GO; Mylotarg®) was the first targeted antibody-drug conjugate (ADC) for AML approved by the U.S. Food and Drug Association (FDA) [2, 4, 5]. It comprises a humanized IgG4 antibody (hP67.6), directed against the surface antigen CD33 and a conjugate of calicheamicin, γ1 (N-acetyl gamma calicheamicin γ1 dimethyl hydrazide) [4, 5]. The use of the CD33 transmembrane glycoprotein for targeted therapy delivery in AML was prompted by earlier studies showing higher CD33 expression level in AML leukemic blasts, as compared to normal myeloid cells [4].

Thus, most of the AML patients have at least a proportion of CD33-expressing blasts, albeit the magnitude varies considerably. The CD33 expression level appears linked to the differentiation status of the leukemia clone (e.g., high level is seen in acute promyelocytic leukemia; APL), the cytogenic profiles and to certain mutations, such as NPM1 and FLT3/ITD [4]. Given this, GO offers a way to more specifically target leukemic blasts [2, 4]. GO was, when granted accelerated approval for relapsed AML by the FDA in 2000, used as single agent and provided second remission rates of approximately 25% in aggregate phase 2 studies [6].

When subsequently used in combination with daunorubicin and ara-C (DA), GO-induced toxicity, in particular adverse liver events, raised concerns, leading to the withdrawal of the FDA approval in 2010 [7]. However, additional phase 3 studies combining lower doses of GO with DA showed improved event-free and overall survival, particularly in patients with favorable- and intermediate-risk AML karyotypes [8, 9].

These data motivated FDA to renew their approval for GO in September 2017, this time for CD33-positive AML both in front line and in relapsed settings [10]. The following year GO was also approved by the European Medicines Agency (EMA) to be used in Europe in adult patients with newly diagnosed CD33+ AML [11]. GO is also approved in the US to be used in combination with all-trans retinoic acid (ATRA) and arsenic trioxide (ATO) [10], and as standard treatment for core-binding factor positive AML (CBF-AML) [10, 11].

Thus, the clinical efficacy and usefulness of GO is obvious in CD33-positive AML, but the more precise molecular mechanisms behind GOs ability to selectively kill AML blasts remain to be further elucidated. So far, the mechanisms involve binding of GO to the CD33 antigen followed by cellular uptake of the formed complex and redistribution from endosomes to lysosomes where the calicheamicin moiety is set free from the CD33-antibody carrier via cleavage.

The free calicheamicin subsequently intercalate with DNA in the nucleus resulting in the formation of DNA double-strand breaks (DSBs), induction of the cell cycle arrest and activation of cell death [4, 5]. Thus, we and others previously reported that GO-induced cell death in part involves activation of apoptosis via the intrinsic mitochondrial route, leading to caspase-3 activation and cleavage of its substrates